It must seem the height of vanity to return, essentially a year later, to an abandoned blog and address a waiting public that likely doesn't exist.

Reason #1) can be summarily described in this post. As much as I claimed when I started this that my tasting notes were for myself moreso than for anyone else, it seems disingenuous to put this level of detail into something and then claim that I don't expect anyone else to read it, much less be influenced by it. And since taste is so subjective and since I, myself, found my preferences becoming more distilled over time (more on this later) I started feeling like kind of a fraud for reviewing beers I might not have even tried otherwise just for the sake of variety. That does a disservice to anyone reading that review and taking my opinion as some kind of expert's.

Reason #2) has to do with my personal taste; namely, that while it probably has never been a secret to anyone who has read any of my reviews that IPAs are my favorite style, they're the majority of what I drink now. My drinking priorities used to be to try to find anything that was rated highly and/or sought after so that I could try and review it for myself, and if I couldn't do that, just try anything that I hadn't had before, and then FINALLY with those two options exhausted, to just drink something I knew I liked. What a pretentious way to drink beer, don't you think? In the first place, to allude back to Reason 1 and the linked article, crowdsourced ratings are, at best, an imprecise way to determine what I'd like. For example, despite these beers being routinely lauded, I rarely prefer barrel-aged stouts to other beers. I've reviewed a number of them here, and I appreciate them, but for me, they're not the most pleasure-able beer to just relax and consume. But these beers are so often placed in the Top-Whatever Beers In The World lists, so I felt compelled to try them. And while I still have an astonishing amount of these very heavy, rarely consumed beers in my cellar -- and let's be real, for the majority of craft beer drinkers, "cellar" equates to "Dubiously Insulated Box in the Closet" -- the vast majority of the time, I reach for fresh IPAs that I can't stop myself from buying because that's what I want to drink. And don't get me wrong: I still like trying new beers, particularly if it's a local IPA, but I'm just as happy to order or buy something that I've had and I know I love and will love again.

All of that said, if you're still remotely curious about what I've been drinking and how I feel about it, you're welcome to check out my Untappd feed. In case it hasn't been said a million times, the rankings I'm giving are really just for me, so I can go on Untappd, see if I've had a beer before and if I've liked it. Only if you have found yourself agreeing with me every time should you use my rankings to guide your selections.

So, all together, so long, everyone. Have a beer for me, and enjoy it. Cheers!
Posted by Amanda at 1:53 PM 0 comments

Email ThisBlogThis!Share to TwitterShare to FacebookShare to Pinterest
Labels: not a review

Cascade says: "This NW style sour ale is a blend of wheat ales aged in oak barrels for up to 12 months, then aged on strawberries for an additional three months." Cascade doesn't distribute through established channels as far as I know, but they do ship to several US states via online orders. Of course for in-house only beer, you'll need to have a friend in Portland, OR -- what a handy thing to have! The Strawberry is available online, so this one was just ordered through their website shop.cascadebrewingbarrelhouse.com. 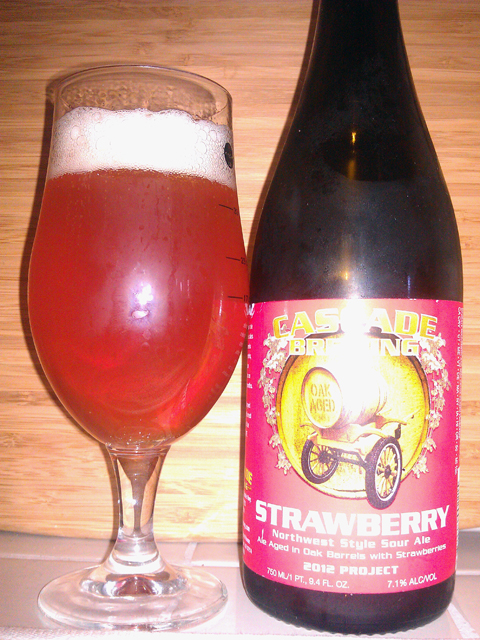 Appearance: This looks like a strawberry beer! It's an inviting pink-red color, with a foamy, effervescent head. It may seem obvious to say that carbonation is effervescent, but lambics and sours do, in my opinion, offer a distinctive type of head on the top of the glass that appears so immediately refreshing.

Smell: There is a strong breadiness as well as an oaky presence. The strawberry is there as well, and a lactic sourness that isn't overwhelming but definitely apparent.

Taste: Here, I was expecting a lot more sour. And don't get me wrong -- it is sour, but I was expecting more. There is only a slight funkiness with the tart, and the sweetness from the strawberry even seems a little subdued compared to the bready body from the wheat and yeast. Others who I tried it with did get a more strong sour character, so maybe my palate was a little off, but it was just less than I expected.

Mouthfeel: This beer comes across as fairly light-bodied, which is interesting, since it's being pulled in a few different directions. In the first place, it's dry and effervescent, which makes for a light body, but since as I mentioned the taste comes across as very bready and full, that gives the illusion of thickness to the mouthfeel. Still, overall, it's more refreshing than not.

Overall: I really like Cascade sours, but this may be my least favorite of the ones I've tried. I wanted more strawberry and more sour, but I think a lot of sweetness that the strawberries may have contributed got lost in the wheat base. It's still a really tasty, drinkable beer, but Cascade makes such knockout beers that this one fell a little short.

Stone says: "Originally dreamt up by homebrewers Robert Masterson and Ryan Reschan, who earned themselves the top prize in our 2013 American Homebrewers Association homebrewing contest, this innovative beer marks a refreshing sea change for IPA lovers everywhere. It was brewed with 280 pounds of coconut and an unusual blend of hop varieties, including a few from faraway lands or just brand spankin' new, and is guaranteed to taste like no IPA that's gone before. Prepare yourself for a tropical breeze of a brew that will lull you to a place of tranquil contentment for a little R & R."

This IPA is a limited summer 2013 release and it checks in at 7.7% ABV. Since it's distributed through Stone, it's been pretty widely available and easy to acquire. 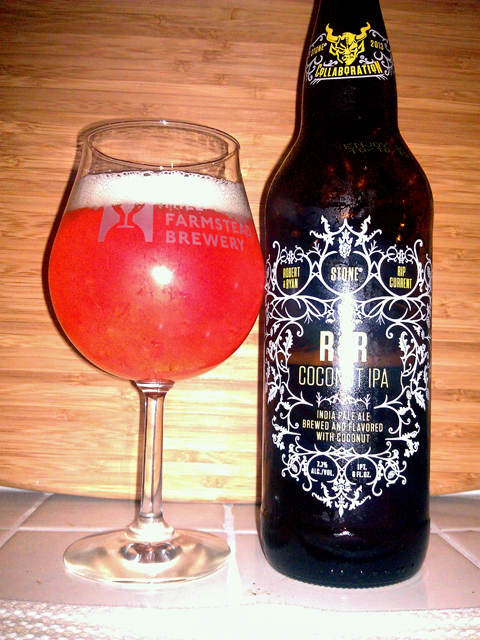 Appearance: This photo turned the beer a lot more orange and cloudy than the beer actually was; in person it was a warm gold and pretty clear, with a small head that receded quickly and left no lacing on the glass.

Smell: The most predominant notes are apricot and peach. The coconut is there but very faint -- I had to search for it and take some really deep whiffs that nearly involved snorting the beer.

Taste: The coconut is a bit stronger on the palate for me, but it's still not the most predominant flavor. Peach and floral notes have that honor here, and there is a juicy pineapple sweetness at the end.

Overall: I liked the juicy stone and tropical fruit notes in this beer a lot, but I was expecting a much bigger punch of coconut both on the nose and on the palate than I got. Thus, I left this beer feeling rather disappointed, which may not seem fair; if I didn't know there was supposed to be a big coconut flavor, I would have probably just enjoyed this IPA on its own merits for its big fruit flavor. However, since it's billed as coconut, and particularly having tried the Bruery's Humulus Palm (a pale ale also brewed with coconut that was just bang-on in flavor) I have to say that this didn't quite cut the mustard.

Brasserie Cantillon in Belgium has, in the last two or so years, become really sought after here in the US. They're known for their deliciously funky open-air lambics, and though many of their offerings do make it across the ocean, they tend to be snapped up really quickly and rarely see the shelves. The beer I'm reviewing today is the organic version of their basic gueze, which is one of their core brews and one of the easiest to acquire. 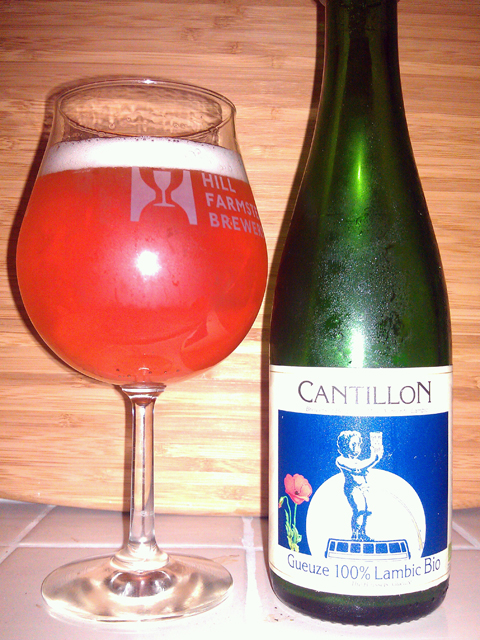 Appearance: The picture made this look a lot more orange than it really is. In person, it's more of a sunny golden yellow, with a dense, foamy head that fades fairly quickly, but leaves a ring around the edge of the glass and patchwork lacing down the sides.

Smell: Tart and funky! "Barnyard" notes, with sour green apple, lemon, straw. Even with the super strong funkiness, it's bright and refreshing smelling.

Taste: A very aggressive, demanding sour flavor, with lemon, a bit of oak from the barrel aging, a white-wine grape note, and finally some of that rubber tire funk which is so off-putting to describe but really works in a beer like this.

Mouthfeel: Light-medium bodied, extremely crisp. The strong tart acidity and dry, crisp body have a way of making me feel like my head is clearing up (until the next beer, of course.)

Overall: Gueze can be kind of a harsh style to the sour newcomer, but for an introduction to the style, you can't go wrong with Cantillon (and by extension, this beer.) It's about as perfect of a representation of a gueze as I can think of: extremely sour and dry with pleasant funkyness.

Toast is a 5.9% ABV Black IPA/Cascadian Dark Ale/whatever from the good folks at Lawson's, who love their hops and i love them for it. I'm under the impression that this was brewed once, in the spring (and yes, I did drink it in the spring, but as you can see I've been really awful about posting my reviews lately, so sorry) and it was sent to me from a friend on the East Coast as part of a big box of delightful hoppy treats from Vermont. 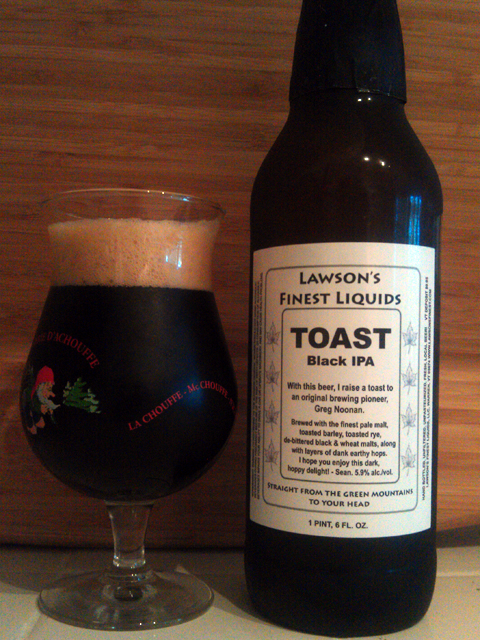 Appearance: Deep brown that is nearly black, with a thick, mousse-textured tan head that is retained for several minutes and leaves sticky lacing on the sides of the glass. Very attractive pour.

Smell: Exactly how I like a black IPA to smell -- dark, roasted character from the malt, lending a robust espresso character, plus a more sweet, floral and resinous hop note that tempers the acidity from the dark malt.

Taste: The dark roasted malt dominates the palate. The hops come through a bit, but they aren't as present as they are on the nose, so the most obvious flavors are those of coffee and chocolate. Where I can detect hops, I get more of a citrus character than I picked up from the nose. As the beer warms, it becomes more astringent.

Mouthfeel: Medium bodied, with the moderate carbonation one expects from an IPA. Because I think the roast character wasn't as well balanced with the hoppy notes I'd want from an IPA, this more effervescent mouthfeel works against the beer. With this kind of flavor profile, I'm programmed to want a more creamy body like in a porter or a stout. It's not a bad mouthfeel, but the whole synergy is off.

Overall: This is a style that people are divided on. Myself, I like it when it's done well. Firestone's Wookie Jack and the Stone 15th Anniversary beers (not to mention Stone's Sublimely Self-Righteous, which I also like, but not as well as the former two) are my favorites of the category. This one is a good tasting beer, but does fall a little short in the exact balance and seems to be tipped more in the robust toasted malt flavor. Not bad drinking, but not my favorite effort.